Death by a thousand cuts—the importance of cumulative effects on watersheds.

Environment damage often results from the collective effects of multiple stressors, be they chemical, biotic, or anthropogenic. But how to capture them all for an environmental impact assessment? Enter cumulative effects assessment (CEA). Monique Dubé discusses how she and colleagues developed and applied a framework for watershed CEA in several Canadian watersheds. Going beyond traditional effects- and stressor-based approaches, the watershed CEA incorporates both the existing condition of a watershed and predictions of its future condition to better inform planning and management efforts. Access the special series “Watershed Cumulative Effects Assessment” in the July 2013 issue of IEAM. 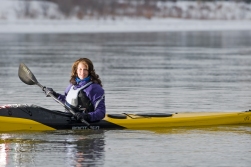 Dr. Monique Dubé is a Project Coordinator in Environmental Performance Improvement at Shell Heavy Oil in Calgary, AB, Canada. She is also an Adjunct Professor in the Department of Biology at the University of New Brunswick (Saint John campus) and a Science Director of the Canadian Rivers Institute. Previously Monique was a Canada Research Chair in Aquatic Ecosystem Health Diagnosis at the University of Saskatchewan and has operated in the consulting and regulatory sectors with over 20 years of professional experience. Her area of interest is in integrated water resource management and watershed-scale cumulative effects assessment. She has published over 180 contributions, is the recipient of an NSERC Synergy Award, and in 2011 was awarded Canadian Geographic Scientist of the Year and a YWCA Women of Distinction. Her work has influenced federal legislation, national environmental impact assessment practices, cumulative effects assessments for Canadian freshwaters, and contributed to patented technology for wastewater treatment. She has served on Scientific Advisory Panels for UNEP, UNESCO and Canada/US Partnerships. She has participated in peer reviews of the Alberta oil sands Regional Aquatic Monitoring Program (RAMP) and was a member of the development team for the recent federal/provincial regional monitoring program in the oil sands. Her THREATS software (The Healthy River Ecosystem AssessmenT System) and watershed health assessment approach has received international attention for its contribution to assessing and managing Canadian watersheds towards sustainability.

Articles Referenced in this Podcast
Dubé et al. 2013. A Framework for Assessing Cumulative Effects in Watersheds: An Introduction to Canadian Case Studies. IEAM 9#3:363-369.